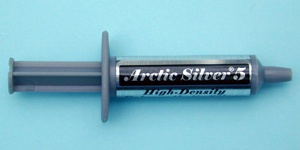 
As an enhancement of the Arctic Silver 3 the new heat-conductive paste Arctic Silver 5 features a heat conductance of 9.0 W/mK and better. Ranking first on the market of high performance heat-conductive pastes this product is intended to be used together with cooling actions of high-power amplifiers. The aim is to extend lifetime and to achieve better efficiency by operating amplifiers and transistors with lower temperatures. The applicable temperature range is - 50 ... + 130 °C.
Due to optimum consistency the application is easy to handle.