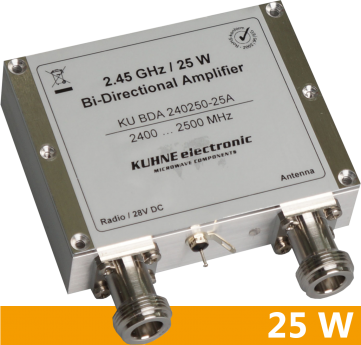 Lead time on request
Printversion (PDF)
Individual Request
Technical specifications
Description
The KU BDA 240250–25 A bi-directional amplifier is designed to support various analog and digital modulation types and signal waveforms in the 2.4 GHz ISM band. The transmitter features LDMOS technology and delivers more than 20 W P1dB power. Switching between transmit and receive path is done automatically depending on the input power level. The receiver’s built-in LNA provides a very low noise figure and additional power gain, which enhances the sensitivity of your receiver.
Features
Applications
For operating high frequency modules legal instructions in the respective country must be followed. For this product especially the maximum allowed radiated power (EIRP) has to be considered.
Downloads