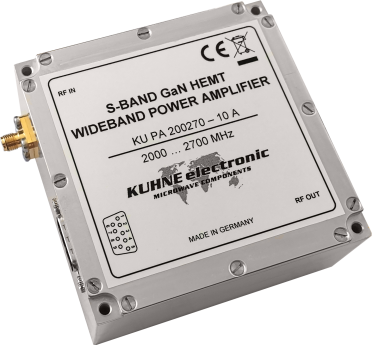 Based on GaN HEMT technology, the amplifier module achieves energy efficiencies greater than 40% over the entire 2000-2700MHz bandwidth at 10W output power.

Available from stock
Datasheet as PDF
Individual Request
Technical specifications
Description
Based on GaN HEMT technology, the amplifier module achieves energy efficiencies greater than 40% over the entire 2000-2700MHz bandwidth at 10W output power. The amplifier is temperature compensated and, despite its high gain (47dB), features a very low gain ripple of typically +/- 0.5dB across the full bandwidth.
The high efficiency in combination with an extended operating temperature range of -20 ... + 80°C allows the use of the amplifier module even under suboptimal cooling conditions. An overtemperature shutdown at +80°C (with automatic restart) protects the module from overheating.
The RF output tolerates arbitrary mismatch without causing instability or damage.
In addition to the standard version with + 28V operating voltage (version A), the amplifier module is also available with wide-range supply voltage input (version B, +10 ... + 50V operating voltage).
The module provides low-impedance monitoring outputs for measurement and monitoring of forward and backward power as well as operating temperature. Power supply, control and monitoring signals are provided via a robust I/O interface (9-pin Sub-D connector) with protection against reverse polarity, overvoltage and EMI.